Why choose the English College in Prague?

Key facts you should know

The English College in Prague was established, and continues to exist, to provide an English-medium education for young people in Prague, primarily of Czech origin, which is second to none academically but also develops every individual’s potential to the full and prepares them for the practical, social, intellectual and moral challenges that they will face in today’s globalised society. We hope that English College students will find themselves in a happy, creative environment, in which they can discover and develop their talents, achieve academic goals commensurate with their intelligence and ability, and gain moral awareness and self-confidence. We also need to stimulate the imagination and promote intellectual curiosity across the curriculum. All these elements are necessary for the enhancement of self-esteem and the fulfillment of each student’s potential. Dr. Nigel Brown

What our parents say

The English College in Prague – Anglické gymnazium o.p.s. is a selective six-year English grammar school, which is also part of the Czech school system.

In 1995 it became the first school to offer the International Baccalaureate in the Czech Republic and every year around 70 of our students take the full IB Diploma exams.

Most ECP graduates go on to study at universities mainly in the UK, but also in the Czech Republic and elsewhere in the world.

The College is a public benefit company, established by the English College Foundation, and supervised by an independent body of unpaid Governors who give their time voluntarily.

Václav Havel’s message to ECP
Read more about our history
Open in a new window
History of ECP
The inspiration for the College came as a result of a meeting in 1990 between President Havel and the British Foreign Office Minister, William Waldegrave. One of the Minister’s advisors was Ann Lewis, now our Chairman of Governors, and at that meeting, it was suggested that a project be launched to revive the tradition of a British-style education in Prague, established by the old Prague English Grammar School, which was opened in 1927 before being closed down by the Nazis. It had a brief re-flowering after the war, but was finally closed down for good by the Communists in 1954.
One of our former Governors, Jan Kovařovic, was a pupil at the school and speaks with gratitude and affection about their teachers including Mr Slavík, who was arrested in 1950 and spent time in prison for anti-state activities – for producing a leaflet commemorating the anniversary of President Masaryk. A team of British and Czech supporters, including Ann Lewis, Dr Martyn Bond and Lord Holme, our first Chairman of Governors, set up a UK registered charity – the English College Foundation. These early supporters had been on the point of giving up because of the difficulty in finding a suitable home for the school and were therefore very grateful to Prague 9 Council and the Mayor at the time, Tomáš Szennai, for the offer of our building on Sokolovská. 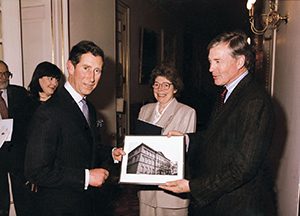 HRH The Prince of Wales and President Václav Havel agreed to be Patrons of the College and eventually the ECF managed to raise the money from donations to open the school to the first 117 overwhelmingly Czech students in September 1994. Message from Lord Holme of Cheltenham “There are at least three principal virtues of the sort of liberal humanistic education which this college offers and which inspired me from the very beginning of the English College.

Lord Holme was instrumental in the founding of the College and was its first Chairman of Governors. The Library was named after him in October 2010.

*Some information on this website may be out of date, following the recent announcement of the death of Her Majesty Queen Elizabeth II.

You can also see

Why us & How to apply

Our story, fees and scholarships See our benefits

The way we teach

Modern education, our approach and curriculum Meet our experts