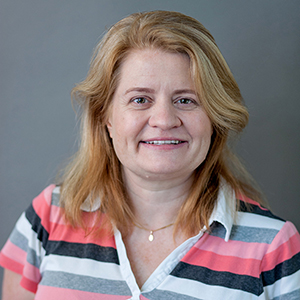 Head of Mathematics Although originally from Ireland, Gail grew up and was educated through secondary school in Hong Kong. She then attended the University of Nottingham where she gained a Law degree, before becoming a Chartered Tax Adviser. Whilst working at KPMG, Gail’s role expanded from being client-facing to include the training of junior staff. Her enjoyment of this led to her volunteering at some local schools, before making the decision to return to university to qualify as a teacher.

She completed a Mathematics Enhancement Course and PGCE at the University of Sunderland and taught in the UK before moving to Prague in 2014 to join the ECP. Gail has also been an Examiner with Edexcel since shortly after moving into teaching. She has run extra-curricular activities including a K’NEX Club, Perspective Art, Puzzle Club, Scuba Diving and Surfing and currently works with ECP’s Duke of Edinburgh’s International Award team.